European Turkey and European Morocco: Two Identity Construction cases in the path to the EEC membership

This article analyzes Kingdom of Morocco’s and Turkey’s full membership application processes to the European Economic Community (EEC) in 1987 from an identity perspective. Construction of both Morocco’s and Turkey’s European-ness are being analyzed following the postcolonial and modernization theories aspects of poststructuralist approach by taking official discourses of the political leaders in the two states at the time of application into account. In the conventional narratives of the establishment of their modern states, Morocco perceived Europe as the other in terms of its being former colonizer whereas Turkey perceived Europe as the other in terms of its being  threat to its national unity before the establishment of the Republic in 1923. In spite of this, two states tried to add European-ness onto their national identity with their application to the EEC in 1987 by being obliged to demonstrate not why European but how European they were. This obligation was shaped around the postcolonial theory for Morocco’s case, whereas it was around the modernization one for Turkey.  The article, then, takes the official discourses on European-ness by the Moroccan and Turkish leaders which were taken as dynamic processes. Later, it analyzes them in the light of postcolonial nationalism for Morocco and modernization theory for Turkey. In this respect, the article demonstrates how Europe and European-ness that was once regarded as the “other” by Turkey and Morocco were tried to add in Moroccan and Turkish national identities in the path to become a full member to the EEC. 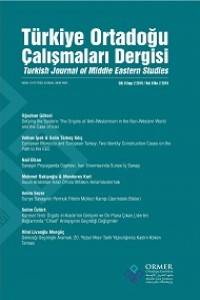