Labor market gender segregation can be defined as an occurring which takes place when group of workers with similar abilities, training, education and experience are faced with inferior treatment in hiring, occupational access, promotion or wage rates compared to the other gender with no relation to their productivity. The paper aims to find out the underlying causes of gender occupational segregation such as human capital endowments, industrial and occupational segregation as well as institutional factors like private/public sector, firm size and social security. The prevailing theoretical and observed literature of gender discrimination is also examined and significance of gender discrimination in Turkey, where traditional, cultural beliefs and norms are still dominant, has been assessed. The level of gender-based industry and occupational segregation within the confines of data set is also studied and the segregation index is computed. It is found that a large percentage of the gender wage gap is related to gender based occupational, industrial segregation and also differences in institutional factors that is pub- lic/private sector. It can also be determined that huge unexplained portion of the segregation prevails due to discriminatory workings of the labor market. 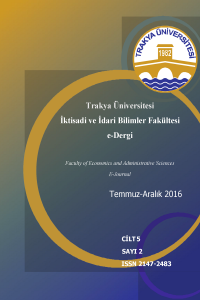