The Use of Sports Broadcasting for the Purpose of Propaganda in the 1936 Berlin Olympics: An Examination on Olympia Film

The Olympic Games held in Berlin, the capital of Nazi Germany, made significant innovations for the history of sports broadcasting in 1936. For example, olympic games for the first time was broadcast live on television at the Berlin Olympics. On the other hand, the Olympic Games were filmed by the famous director Leni Riefenstahl in order to be able to use it for Nazi propaganda purposes. In 1938, Riefenstahl made the documentary film, Olympia, which was published in 1938. The film Olympia became a cult study in the field of sports broadcasting and propaganda. In the study, it was tried to find out how the Olympics in Olympia was reflected on the masses and what kind of ideological messages were given for propaganda purposes. For this purpose, the five sequences of the Olympia film, which were determined within the scope of the study, were examined by using the semiotic analysis method. In the study, the sequences were analyzed in the light of semiotic concepts of USA semiotics scientist Charles William Morris. 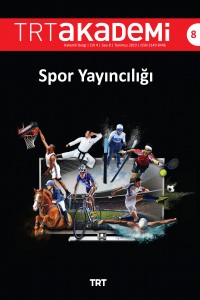