Development of students’ views on the demarcation between science and pseudoscience

This research aimed to determine and develop 8th grade students’ views on the demarcation between science and pseudoscience. In this context, the study was designed with convergent parallel design which is a mixed research method. The study group for the quantitative dimension was composed of 32 8th graders in a secondary school in Akdeniz district of Mersin province. The study group for the qualitative dimension consisted of six students selected from among these 32 students by purposeful sampling method. As data collection tools, Pseudoscience Belief Scale which consisted of 21 questions and a semi-structured interview form composed of nine questions were used. During the data analysis, statistical calculations were done by using the SPSS package program for the quantitative dimension. Content analysis method was used to categorize qualitative as codes and themes. Based on the study results, it was observed that the pseudoscientific beliefs were not based on gender and it was found that students’ pseudoscientific beliefs decreased with the implementation in which the argumentation method was used. 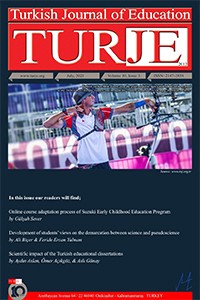