Background: Obsessive-compulsive disorder (OCD) is a severe, common and most often chronically debilitating disorder characterized by repetitive, ritualistic, and distressing thoughts, ideas, and behaviors. In this retrospective study, we have presented patients who have admitted to our clinic and was diagnosed with obsessive-compulsive disorder and their baseline and after-treatment symptom severity. Methods: Participants who admitted to Aksaray University Faculty of Medicine Department of Child Adolescent Psychiatry were evaluated. Medical records were obtained by previous clinical evaluation and scaled scores for this retrospective study. The Schedule for Affective Disorders and Schizophrenia for School Age Children- Present and Lifetime Version, DSM-5 (K-SADS-PL) was applied to every patient at first session of treatment. Symptom severity of OCD was recorded according to Children’s Yale- Brown Obsessive-Compulsive Scale. Results: 73 patients were included in the study. 49.3% was male, 50.7% was female. 52.1% of patients have one or more comorbid disorders. All patients were using at least one pharmacological agent. There was a significant difference between baseline and eight weeks after treatment CY-BOCS total scores (p<0.001). Conclusions: As a conclusion, pediatric OCD is a common and serious psychiatric disorder and SSRI medication is an effective choice. Compliance to treatment and regular follow-up is important for improvement. 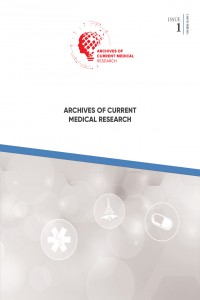