İsmet İnönü visited Istanbul for the first time between 2-7 March 1939 as the President and National Chief. In the first two days of this visit, which lasted for about a week, he met with Istanbul craftsmen and listened to their problems. Then, on March 4, he gave a tea banquet to the high-level military and civilian officials of the city and press members at Dolmabahçe Palace. Some opposition figures, who were pushed out of the politics due to various conflicts during the National Struggle and Atatürk period, were also invited to this banquet. Accordingly, İnönü met with old friends such as Rauf Orbay, Ali Fuat Cebesoy and Fethi Okyar during the banquet. As a result of the "peace and reconciliation" policy he followed, he assigned these names as diplomatic missions and important duties in the parliament in the following days. Within the scope of the visit, İnönü met with the villagers of Çatalca and Silivri. He visited Istanbul University, Ayazağa Horseman Riding School and Haliç Shipyard and received information from the authorities. The President's first visit to Istanbul created excitement and satisfaction among the people of the city. The press showed great interest in the investigations and contacts that İnönü made in Istanbul as the "president" before the general elections on March 26, 1939. The outstanding journalists of the period wrote many articles about the joy of the people in Istanbul, the attitude and statements of İnönü. In this study, the details of İsmet İnönü's first visit to Istanbul, his impression on the press and background of the Dolmabahçe reception are examined. 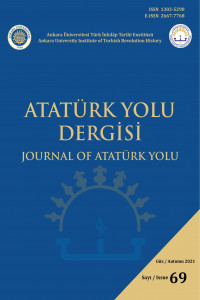