THE USAGE OF WASTE CLAYS CONTAINING BORON IN DRILLING MUDS

In this study, the usability of the process solid wastes (PKA) of the boron processing plant obtained from Kırka-Eskişehir province in drilling mud was investigated. Within the scope of the study, the American Petroleum Institute (API) Spec. Spud type drilling mud samples were prepared according to the 13-A standard. Different concentrations (4-8% by weight) and different particle sizes (75-50µm) of PKA and drilling bentonite were added to the prepared samples. Three different applications were made within the scope of the study. In the first stage, PKA was evaluated directly as a drilling mud additive based on its rheological and filtration properties due to its clay content. In the second stage, samples with the same concentration as bentonite, which is widely used in drilling applications, were prepared and evaluated. In the third stage, it was evaluated that PKA could be an additional additive material to the drilling bentonite. In the scope of the study, the usability of PKA for waste recycling investigated. Rheological and filtration analysis of drilling mud samples used in experimental studies API RP. Made according to the 13B-1 standard. According to the analysis results, PKA caused an increase of 2.38% on sludge weight. It provided a 112,5% increase in apparent viscosity in proportion to the concentration. There was an increase in plastic viscosity by 66,6% in 75µm particle size and 33,3% in 50µm particle size. With the amount of 4% additive for the yield point, it increased 3,5 times between 8% and reached 0,4392kg/m2. In gel strength analyzes, there was no effect for 10 seconds gel strength. However, the gel strength value increased by 50% for 10 minutes gel strength analysis. On filtration, 44,44% in 75µm particle size; It caused a decrease of 42,8% in 50µm particle size. As a result of the analysis, it has been determined that PKA can be used as an auxiliary additive to bentonite in drilling muds. It can be used in shallow and deep drills within the scope of waste assessment. 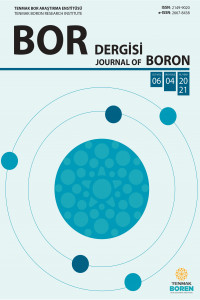