WEATHER EVENTS AND THEIR EFFECTS IN TELEVISION NEWS: TEXT STRUCTURE AND SUBLANGUAGE

This paper focuses on TV news texts about the effects of weather conditions on human life and physical environment, and presents a qualitative analysis with respect to text structure, lexical and/or grammatical means of expression, and any constraints which might have shaped them, in an attempt to determine whether or not a subject-specific sublanguage has been formed. The database consists of 27 news items from the TRT News Bulletin for the Deaf and Hard-of-Hearing broadcast in the period between September 2019 and February 2020 (a total of 1,845 seconds/352 units/2,987 words). It has been observed that these items consist of two parts, namely the lead-in, where an outline of the news is presented, and the package, where the answers to six questions (who, what, where, when, how and why?) are found. This text structure seems to lead to a partially deformed information structure in the lead-in, which in turn causes a relatively lower frequency of null subject pronouns, which are employed to maintain the topic. In the package, subject-specific lexical and/or grammatical structures seem to have become relatively more frequent, and various co-occurrence patterns and frozen structures have emerged. What seems to have priority is the rendition of information concerning the location, time and duration of the weather event as well as the type, intensity, and possible time-/location-bound variation of precipitation, if any. The emergence of verb-noun phrase collocations especially and the consequent use of a more limited lexicon seem to have been a result of expressing how weather events affect daily life and/or the physical environment. However, in terms of syntactic diversity, a departure from the general language or a relative simplification does not seem to have occurred. Belonging to a specific semantic field and containing a limited lexicon, the news texts in the database may be argued to involve a sublanguage influenced by the specialist language of meteorology; however, in terms of syntactic diversity, features of the general language are observed. This may be accounted for by the fact (i) that TV news are expected to be easily understood by the general audience and (ii) that such texts are produced based on a conventionalized text structure and the news discourse adopted by the institution. 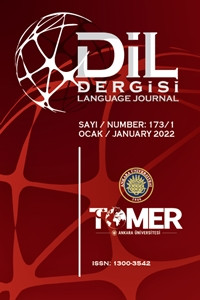