Derivative markets developed for eliminating uncertainty and risk arising from financial markets can make predictions about the future by using past price movements in case the market is not effective. In this context, in this study, firstly, the effectiveness of the Turkish Derivatives Market was tested by applying the Augmented Dickey-Fuller (ADF), Phillips-Perron (PP) and Kwiatkowski et al. (KPSS) linear unit root tests and Kapetanios et al. (KSS) nonlinear unit root test. As a result of all unit root tests, it was concluded that the series did not show random walk, so that the market was not effective. Then, the method that shows the highest performance is tried to be determined when forecasting the end of day settlement price of the TL/Dollar and Bist-30 contracts which is traded in the Derivatives Market. For this purpose, the forecasting results produced by the time series analysis methods are compared with the results of the artificial neural network model which has the best performance by employing different architectures, layer numbers, cell numbers in layers, activation functions and learning methods using the data which is provided from Borsa Istanbul Inc. and covering the dates between 04.02.2005 and 31.12.2015.According to the results of analysis, ARMA (4,4) model performed better than RBF-1-BL artificial neural network model and ARCH (1) model for TL/Dollar contract series. For the Bist-30 contract series, TDNN-1-B-L artificial neural network model has higher predictive performance than ARMA (4.5) and ARCH (1) models. 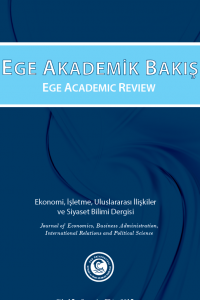