The number of university campuses and buildings in Turkey has been rapidly increasing since the 2000s. In parallel to
changes in higher education policy in this period, university buildings are obtained via different methods and
approaches, which influence their architectural quality. Given that, university buildings built in this period show a wide
range of qualities. This study focuses on campus gate buildings, which can be considered as the modest part of this
large university building stock.
The gates and entrance buildings’ history on conceptual and structural characteristics can be traced back to the first
architectural products. One of the conclusions that can be drawn from historical readings on this topic is that the gate
structures are not solely considered as functional structures as they involve and demonstrate symbolic meanings. With
this perspective, the study aims to offer a categorization of contemporary campus gates. This categorization can be
used to discuss the meanings of the recently built campus gates as it relies on information beyond the gate’s primary
functions.
When an evaluation is made on contemporary university gates, it would not be wrong to argue that two main
approaches are dominant in designing urban gates; formal and rational. Form-oriented approaches tend to rely on
historical or symbolic information. They often tend to adopt methods such as transferring a pre-designed logo to the
architecture. It is observed that the gates designed with this approach value the symbolic aspects and ignore the
functional quality. On the other hand, rational approaches do not give priority to form as much as the former one and
tend to focus on the harmony between form and function. The form is designed by considering the basic design
principles.
While the number of gates which are designed with form-oriented approaches is increasing nowadays, discussing the
recently completed campus gate’s architecture and its design principles are important. Dokuz Eylül University
Tınaztepe Campus East Gate offers a different example in this sense. The unique ideas that differ from the other recent
counterparts and some characteristics which are parallel to the ideas of some modernist premises could enrich the
meaning of the building and make it instructive. 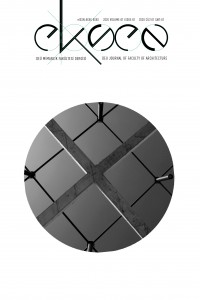