In this study, the relationship between strategic commodities and financial variables tried to be detected using ARDL bounds test for period from 01 Jan 2002 to 27 Sept 2016 with daily data.  While as a strategic commodity gold which is considered as particularly safe harbor and oil which is one of the most important energy sources are taken into consideration, interest rate, exchange rate and stock market index have been included as financial variables. In the study, which investigates the cointegration relation with a different equation for each variable, the cointegration relation for model in which the stock index is a dependent variable has been identified. According to the results of the analysis, there is a positive relationship between exchange rate and ISE 100, while interest is seen as an alternative investment channel for index in the long term. The direction of the relationship between the exchange rate and the interest rate is negative in the short term. In addition, the error correction coefficient has been determined as expected negative and significant but quite low. 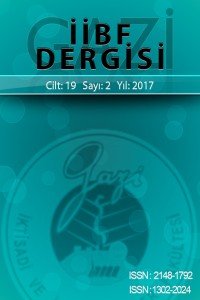