The aim of this research was the comparison of mental toughness (MT) and emotional intelligence (EI) of youth soccer players based on their soccer experience and player positions. Participants of the study composed of totally 458 youth male soccer players who are between 17-20 years old (x̅=17,75) and 1-14 (x̅=7,22) years of soccer experiences. Data obtained by using demographic questionnaire, Sport Mental Toughness Questionnaire (MTIS), and Trait Emotional Intelligence Questionnaire (TEIQ). According to homogeneity and normality test results, The One-way ANOVA was used for the analysis of data. The findings demonstrated that there is no significant difference between sports age and position variables in terms of MT. In addition, results indicated that soccer experience make differences on well-being and emotionality subscales of TEIQ. Besides, according to player positions and TEIQ subscales, there were significant differences between sociability. In conclusion, soccer experience is one of the factors that influence well-being and emotionality positively. Moreover, it observed that midfield players’ social abilities are higher than winger players and defensive midfield players. 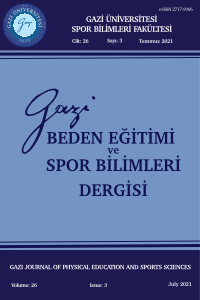