International Journal of Aeronautics and Astronautics

Gas turbine aircraft engines are the most commonly used engine type in today's aircrafts. Turbojet engine, which is one of the gas turbine engine type, is used especially in warplanes and some passenger planes with its high power generation and speed. In this study, the thermodynamic analysis of a small-scale jet engine that generates thrust with reaction from gas turbine engine is carried out with the data obtained under real operating conditions. With the analysis, exergy destructions, exergy efficiency, exergy improvement potential and relative exergy destroying rate of small-scale jet engine parts were calculated. According to the results obtained, it was seen that the greatest exergy destruction was in the combustion chamber, so at first, the exergy improvement should be done in the combustion chamber. 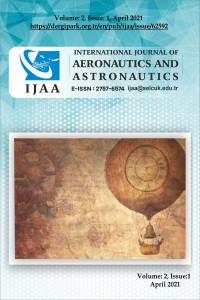