Asparagus (Asparagus officinalis L.) is a dioecious species in the Asparagaceae family. Male plants are more productive than female plants. More efficient plant propagation can be followed by focusing on the production of male plants with tissue culture techniques. The aim of this study is to determine the micro-propagation effects of shoot tip and lateral bud explants taken from donor plants of different ages (3 and 5 years). Jersey Knight F1 was used in the experiment. To obtain shoots from explants, 0.2 mg l-1 NAA (naphthen acetic acid), 0.2 mg l-1 BAP (benzyl amino purine), 0.2 mg l-1 kinetin, 30 g l-1 sucrose and 7 g l- 1 agar containing MS (Murashige and Skoog, 1962) medium was used. The shoots were transferred to proliferation MS medium containing 0.5 mg l-1 BAP and 0.2 mg l-1 IBA (indole butyric acid), and two subcultures were made. MS medium containing 0.5 mg l-1 IBA was used for rooting of the shoots. Shoot development was obtained from all cultured explants. In the first subculture, the average shoot numbers per explant obtained from 3 and 5 years old plants were determined as 7.0 and 7.18, respectively. While an average 9.43 shoots were obtained from shoot tip explant, 4.75 shoots from the lateral bud explant. In the second subculture, an average of 9.13 shoots from 3-year-old plants and 9.55 shoots from 5-year-old plants were obtained. While 10.53 shoots were obtained from the shoot tip, 8.15 shoots were detected from the lateral bud. The proliferation coefficient of the shoot tip explant in the first subculture differed significantly compared to the lateral bud explant. In contrast, the difference in proliferation coefficients decreased in the second subculture. 48.0% and 58.0% rooting rate were obtained from the explants of the 3 and 5 years old plants respectively. The average rooting were 65.0% in the shoot tip explant and 41.0% in the lateral bud explant. 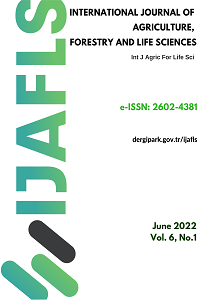