Environmental pollution negatively affects the life activities of the living things of the environment and causes structural damages on the all living and inanimate things. The extent of the damage caused by human-made pollution to nature and the environment is increasing day by day. Heavy metal pollution is one of the most important causes of environmental pollution. Cadmium, which is one of the most important pollutants, is a highly toxic metal and is not used by living things, even in trace amounts. Cadmium is also a very toxic heavy metal for plants. As with other heavy metals, it triggers oxidative stress by increasing the production of reactive oxygen species in plant cells, causing DNA damage and abnormalities in DNA and RNA production. Safflower is a very important oil plant with high economic value and intensive use as a raw material in many sectors. In this study, in experimental groups prepared at different cadmium concentrations, the negative/genotoxic effects of cadmium on the mRNA expression levels of the FAD2 (FAD2-6, FAD2-7, FAD2-11) genes, which is responsible for the conversion of oleic acid to linoleic acid in different safflower varieties (Balci, Bdyas-04, Linas and Asol) has been determined by quantitative Real-Time PCR method. As a result, it has been detected that the decrease firstly in the expression of FAD2 genes at increasing cadmium concentrations in all cultivars. And also, re-increase at 160 and 320 mg L-1 which can be considered as critical points, have been accepted as an indication that the defense mechanism against stress is activated and FAD2 genes play a role in the defense against stress. In conclusion, the obtained data showed that FAD2 genes in safflower cultivars not only in the conversion of fatty acids but also play a critical role in defense against cadmium heavy metal stress. 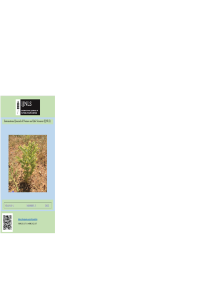