The Qur'an In The Lıfe Of The Kyrgyz Place And Importance

Islam as a universal religion has spread among people from different geographies, languages and cultures in the world. Every nation adopted Islam in accordance with its life philosophy and lifestyle, and tried to fulfill its orders. The Kyrgyz people are also IX. He is one of the Turkish tribes who accepted Islam in the century. The Holy Book of Islam, the Holy Quran, has an important place in the individual and social life of the Kyrgyz people. From birth of children to marriage of spouses; The Holy Quran has always existed from the funerals of the deceased to various ceremonies. Giving the beautiful names of the Qur'an to children is one of the effects of the Qur'an on our culture. Even during the communist era, the Kyrgyz people, due to their respect and reverence for the Qur'an, hid the copies of the Qur'an from atheists and buried it underground, and tried to prevent it from being burned and destroyed.In this study, we will touch on the respect of the Kyrgyz people for the Qur'an and its place in daily life, and we will try to reveal the respect of the Kyrgyz people for the Qur'an and the use of verses by benefiting from my 12 years of experience as an imam. In this context, we will try to explain with some anecdotes how the Qur'an plays a central role in Kyrgyz customs and Qur'an feasts, funerals and other ceremonies. 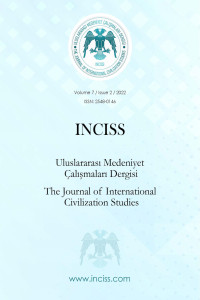