Objectives: The aim of study was to compared the anaerobic power values generated by upper and lower limbs muscules and hearth rates in elite Freestyle and Greco-Roman wrestlers. Methods: The sample of study composed 17 Freestyle and 16 Greco-Roman elit male wrestlers who were experienced in national and international wrestling competitions.All participants performed 30-seconds Wingate test on a Monark 894/891 E cycloergometer for the lower limbs and then upper limbs. The load was individually selected in proportion to the body weight and was 0.075 kp/kg for the lower limbs test and 0.035 kp/kg for the upper limbs test. During these tests, maximum anaerobic power (MAG), mean anaerobic power (MAK), lowest power value (MinG), power loss (GK) and fatigue index (YI) were calculated and expressed in absolute and relative terms (per unit body weight).The resting and maximal heart rates of athlets was determined by using a polar monitor (Polar RS 400). The findings obtained were studied with SPSS 17.0 statistics programme on PC while the difference between the averages of groups were examined with independent t- test method in the meaningful ranges from p<0,05. Results: According to result of statistical analysis,the differences between groups in terms of both heart rate values and anaerobic power values (absulute and relative) generated by upper and lower limbs muscules were not significant (p>0,05). In addition, there were no significant difference in body weight, height and BMI values between both groups. Conclusion: As a results, it could be said that similar to training performed and energy adaptation process as a reason the lack of difference in terms of anaerobic power and heart rate values in the both style wrestlers. This study provides a brief screening for physiological profiles and attributes of elite male wrestlers according to wrestling style 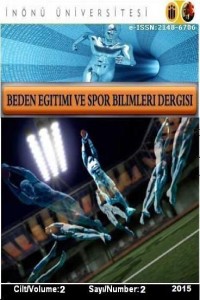