The branding of a city depends on the successful marketing of that city. Indeed, in order to successfully market a city, a proper image for the city must first be formed. In the image creation process, competitive advantages (historical, cultural and natural attractions, etc.) are emphasized by city marketers. In this research, it was tried to determine which factors constitute the city image of Gümüşhane in order to determine the competitive advantages of that city in the branding process. Due to the small number of tourists in the city, as a research sample, university students from other cities were chosen. The questionnaire form prepared within the scope of the research was applied in face to face interview technique on the basis of convenience sampling on 508 university students in March 2018. The obtained data were analyzed by frequency analysis, exploratory factor analysis, reliability analysis, t test and one way ANOVA. After the exploratory factor analysis, five factors were found that constituted the cognitive city image. These are; modern urban superstructure, clean environment, locals’ attitude, core attractiveness and side attractiveness. In addition, whether the cognitive and affective image differs by gender, area of arrival and life time in Gümüşhane was examined by means of t test and ANOVA. 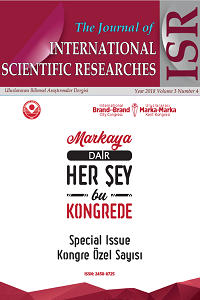