This study was conducted between November 2013 and November 2014 to determine the effects of different materials used on baited traps on fishing efficiency. In the study, three different types of traps with two different types of funnel, which were totally 12 traps, were prepared by covering wire mesh or multifilament net. Seventy-two fishing operation were performed in the coasts of Çanakkale and Gallipoli Peninsula. A total of 132.4 kg of catch, which belonged to 34 species in 18 families, were obtained during trials. According to the material used, the traps covered with wire mesh were seen more efficient than traps covered with rope net. However, there was no statistically significant difference among the aspects of number and weight of fishing (p>0.05). In the comparison of materials between the traps with the same model, the difference between the number of products was found to be insignificant (P>0.05). However, the difference between the weights of the product captured by the “O” shaped trap model was statistically significant (p<0.05). Although there is no significant difference in terms of fishing efficiency (p>0.05), it was concluded that the use of the multifilament net material in terms of ease of use and durability would be more appropriate. 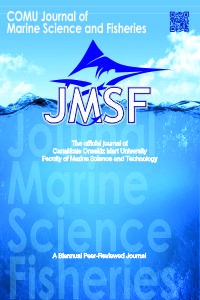