Journal of Transportation and Logistics

Settlement of Railway Track on Reinforced Ballast Overlain by Clayey

Air transportation development is strictly related to airport competitiveness, since the airport management seeks to improve the capacity to produce services, increase passenger and aircraft movement, improve revenues from aeronautical and non-aeronautical activities, and optimise the other items related to the competitiveness of this type of organisation. In this sense, this study seeks to identify variables associated with the competitiveness of airports, based on their infrastructures, operations, and locations, which can influence the decision-making of airport managers continuously and efficiently. An analysis of the seven busiest Brazilian airports, in terms of aircraft and passenger movement, has been made, and multivariate data analysis has been used through a multiple regression, verifying the relationship between the variables of airports competitiveness, such as the total area of the airport site, number of aircraft parking positions, number of airlines, quantity of aircraft movement- landings and takeoffs, total number of passengers and the GDP of the city where the airport under study is located. The results present an index of competitiveness for each airport analysed after the data mathematical treatment, showing the coefficients at the general equations form aircraft and passenger movement. 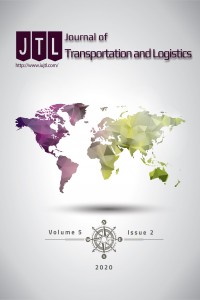 The JTL is being published twice (in April and October of) a year, as an official international peer-reviewed journal of the School of Transportation and Logistics at Istanbul University.