Transformation of the War Concept: Investigation of Hybrid Wars in the Example of the First and Second Gulf War

The concept of war is in constant transformation and change. As humanity evolved, the course of wars changed in line with the technology and environment of this age. Although the existence and causes of wars have not changed greatly since ancient times, war types, tactics and strategies have changed. The battles performed today differ significantly from traditional battles. Battles turn into a genre in which different tools and methods are used together, which is also referred to as hybrid warfare. Although this type of war has been used since antiquity, it has often started to find its place in the security literature, especially after the collapse of the Soviet Union. This study intends to present the basic principles of hybrid warfare which is frequently used and one most of the important methods of warfare of our time and to contribute to Turkey's defense and security policy, survivability strategy. For this purpose, firstly, the transformation of the concept of war and the hybrid warfare that took place in the period from the Ancient Age to the present day was examined. In the study, the 1st and 2nd Gulf Wars were taken as a sample. Here,the reason of selecting the First Gulf War was that it was at the beginning period of the unipolar world order, cyber attacks were used in the war, and it was an important war in the development of the hybrid warfare. The 2nd Gulf War, on the other hand, was preferred because it is one of the most important examples that express the transformation of the wars after the September 11 attacks. Cyber wars were prefered because they have been the ones in which psychological warfare methods were effectively used. Literature scanning and sampling method were used in the study. What is hybrid warfare? What is the reason and importance of using hybrid identification? How does hybrid warfare differ from traditional warfare methods? Can Gulf Wars be considered as hybrid warfare? What is the contribution of the definition of Gulf Wars as hybrid warfare to the literature? Answers to the questions are sought. 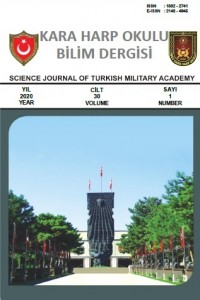