In the early twentieth century, women were consistently excluded from the literary studies and deprived of employment opportunities in America. Paul Lauter underlines that the 'American canon was sanctified by the male literary critics trained in formalism, reflecting the professor's concern that a truly American art is to be attractive when it embodies the values of masculine culture' (Lauter 34). It is not wrong to say that there was some prejudice against women in the literary works, especially in the dramatic works. The main reason for this was that women worked for long hours with low pay in the 1920s. Thus, they did not have the social and economic freedom. Of all the 20th century American women playwrights, Susan Glaspell gained her reputation due to the fact that she rebelled against the gender norms and played a crucial role in the American theatre. Also in Britain the early twentieth century is generally presented as being unsuccessful for the British female playwrights. In addition, in the 1920s it was acknowledged that the female playwrights were not prolific and that society tended to appraise female playwrights less favourably. However, in fact; the inter-war female playwrights were entering upon the male-dominated theatre. One of the ignored, but great English playwrights in the 1900s is Cicely Hamilton. Diana of Dobson's is her great work which was a commercial drama in the early 20th century England.
This paper emphasises the social problems and the social identity of the women in the early 20th century by illustrating an American and an English feminist play. Trifles which was written by Susan Glaspell reveals the poor conditions the women faced and the sexual inequality they encountered. The caged bird which symbolises the woman in the play is also representative for the women in society. The other play, Diana of Dobson's was written by the English suffragette Cicely Hamilton. Overworking, problems of poverty, ill-pay, and domestic service are some of the themes in this play. The main focus of this paper will, particularly, be on comparing and contrasting the social and economic roles of the women between the American and English plays by the women playwrights who had both lived in the early 20th century and manifested the achievement of the British and American female playwrights against the male-dominated drama.

Female playwrights, the caged bird, the role of the women, sexual inequality 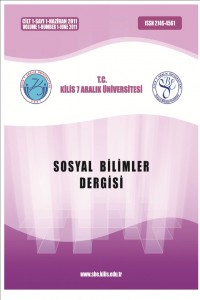