Place names are a valuable part of cultural heritage with their sociocultural and symbolic meanings, the function of reminding the past, and carrying oral culture. Names not only maintain their social roles for people in daily life with their rich associative features, but also play an important role in the maintenance of cultural identity. Place names have a significant place in Kurdish oral narratives, especially in kilams(a kind of Kurdish folkloric song). Kurdish kilams involve ‘oral maps’ and narrative forms created by place names. This study aims to reveal the roles and functions of the place names in the Kurdish oral culture. ‘Topogeny’, the term coined by James Fox to refer an ordered succession of place names in regard to spatial flow of the story, is seen in some Kurdish kilams. Topogenic narrative forms emerged in Kurdish oral narrations function as transmitting the knowledge that has cultural and historical importance, and encoding that knowledge on the space. This study, which emphasizes on the importance of historical and topogenic narrations treated through the names, examines the long kilam “Eli Xarza” (Eli the Nephew, includes 160 place names) whose topic is on the breaking out of prisoner Eli in the later 19th century. The travel from Maku city of Iran to Erzurum through which the names of the villages, towns, rivers and highlands are sung and narrated in an ordered sequence is an example of what Fox has named a ‘topogeny’. 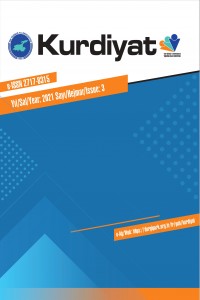