The effects of magnetic field application on the mycelial growth rate of oyster (Pleurotus ostreatus) and shiitake (Lentinula edodes) mushrooms were studied. 30 ml, %2 Malt Extract Agar (MEA) which autoclaved at 121°C for 30 minutes was placed in 9 cm diameter sterilized Petri dishes. Then, the mycelia of both fungi were planted in the Petri dishes under sterilized conditions, and magnetically exposed to one of seven magnetic field strengths, 0.25, 0.5, 1, 5, 10, 50, and 100 mT for different periods of time (5, 10, 15, and 30 min) using a solenoid., The cultures were conserved at room temperature (approximately 23°C). Once every two days, the growth rates of the mycelia were measured for a period of 20 days. A two-way analysis of variance was performed with SPSS18 for different magnetic field strengths and intervals of application. The LSD test was performed to show the differences. The following results were found: 1) Magnetic field application had a significant effect on the mycelial growth rate of shiitake mushroom, but exposure time and magnetic field-exposure time interaction had not any influence on the growth. In this study, it was concluded that 5 mT and 10 mT magnetic field exposure may be efficient for the development of shiitake mushroom mycelia. 2) Mycelial growth rate of oyster mushroom was not significantly affected by a magnetic field, exposure time, and magnetic field-exposure time interaction. 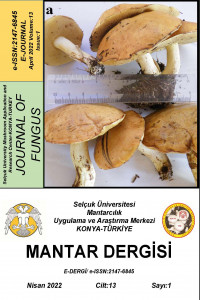