Dēw/Demons and Their Manifestations in Kurdish Folklore

Dēw/Demons are one of the creatures that appear a lot in myths and are mentioned a lot. Dēws are often depicted as massive, fearsome, powerful and humanoid tangible beings. They are sometimes described as “xul”, fear, delusion, and abstract beings. Iranian nations, especially before Zoroastrianism, believed in Dēws as representations of goodness, gods and goddesses. Along with Zoroastrianism, Dēws were considered representatives of Ahriman. Sometimes they are called with special names, sometimes they are called with a general name “Dēw”. In addition, many beings with the same characteristics but called by different names such as fairy, witch, dragon are also mentioned. While these beings were considered as representations and manifestations of Dēws in many studies, this idea was strongly supported by examples in this study. All of these definitions, namings, beliefs and descriptions about Dēws and more have been transferred in Kurdish Folklore and have survived to the present day. In this study, we discussed Dēws and their relations with magic, their manifestations, types and representations within the framework of Kurdish Folklore. The main basis of this study is Kurdish and Iranian myths. However, the main source of our work is the Avesta book, which is considered the holy book of Zoroastrianism. In addition, many other works in this field have formed the bibliography of our study. Our study consists of two main titles. While our first title is about Dēws in general, our second title is about representations of Dēws such as Fairy, Witch, “Kula Stûbizengil”, “Elk”, “Meyreman”, “Xapxapok”, “Reşê Şevê”, “Rotê Şevê”, “Dêlegur”, “Gurê Manco”, “Xermexozan”, “Psîka Girnexok”, “Gornepaş”, “Zibên” and “Sibat”. In our study, along with the necessary explanations and definitions about these beings, many examples of how and in what context they are mentioned in Kurdish folk narratives are also shared. As a general conclusion, we can say that Dēws and their manifestations, whether with the name Dēw or with different names, have been very vividly transferred to the present day in Kurdish folklore and without much meaning shift. 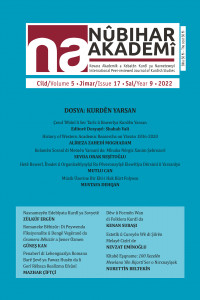