Synonym words in languages are enriching items. While some languages have more than one synonym for a word, in other languages words have few or no synonyms. Synonyms are words that describe the same concept from different angles and reveal various aspects of the concept. Synonymous words are used extensively in Kurdish and especially in the Zazaki dialect. All words specified as synonyms have nuances. These words are accepted as synonyms within the general structure-meaning relationship. Especially in geographies where different cultures and languages are intertwined, a serious increase occurs in the number of synonyms. Considering the geography it is spoken in, Zazaki; Turkish, Arabic and Persian languages are spoken in a geography where the Kurmanji dialectic forms a mosaic structure. This cultural mosaic and linguistic atlas led to the emergence of many synonym words in Zazaki. The aim of the study is to identify synonyms in Zazaki in the dictionary prepared by the Vate Study Group; To analyze these words semantically and to determine with graphics in which sounds have more synonyms. The mentioned dictionary and linguistic resources in various languages will be used as sources. Although there have been many studies in this field in Turkish, there has not been an independent study in this field in Zazaki until now. In this respect, the study is important. Categorical studies to be conducted in a language that is about to disappear are important in terms of revealing the inventory of the language. The synonyms determined in Zazaki are given at the end of the study. In the study, care was taken to identify the words actively spoken in the daily language, words taken from or derived from foreign languages were not included in the study. 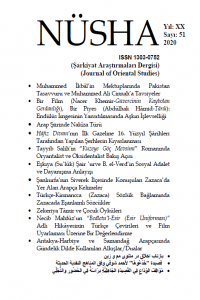