Prophets are personalities that left traces in human history. Their lives are regarded as important in every aspect and studied with interest. This interest has gained direction according to the needs of the age in which the interest takes place. Today, issues such as family and children are widely researched and discussed. In this respect, the acquis in the life of the Prophets is valuable. For, the work and actions of people who have social influence both for the believers of the prophets and those who are left out cannot be ignored. In this article, the relations of the prophets and especially the last prophet with children are discussed. With the idea that the most reliable information about the past prophets can be obtained from the Quran, the example of the prophets mentioned in the Quran in the context of their relations with children has been mentioned. In the Quran, there are references to the relations of approximately fourteen prophets with their children. Although limited, it is possible to reach some principles based on this information. We have the opportunity to find a lot of information about Muhammad's children and his relationships with other children. On the one hand, it has been possible to see the manifestations and changes of the prophets' lineage's communication and relations with children in the life of the last prophet. In the research, attention was paid to the use of a wide range of Sirah sources. First of all, the Qur’an, hadith literature and Sirah books were scanned. Finally, dozens of articles on the subject were reviewed, and information and comments were used as compilation. After all, high values of law and morality in the context of relations with children of the prophets and the last prophet Muhammad were found to be included in sources with instructive forms. 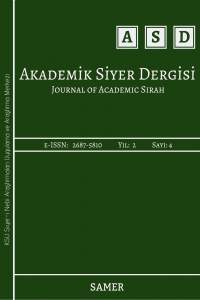