This study was conducted under greenhouse conditions in order to determine the effects of polyvinyl alcohol (PVA), polyacrylamide (PAM) and humic acid (HA) applications on the improvement of some soil quality (erosion ratio and coefficient of linear extensibility) parameters. Surface soil samples with three different textures (clay, loam and sandy loam) were used in the study. In the greenhouse, PVA, PAM and HA were applied to soil samples at doses of 500, 100 and 500 ppm, respectively, and incubated in four different periods (0, 15, 30 and 45 days). During the incubation, irrigation was performed when 50% of the available moisture in the soil samples was decreases. As a result of the analysis and evaluation made on the soil samples after the incubation, it was determined that PVA, PAM and HA applications reduced the erosion ratio and linear extensibility values in all three soil groups and that the conditioners were more effective in the soil in clay texture category. It was observed that the conditioners were ranked as PVA>PAM>HA in terms of the said effectiveness. It was observed that PVA's first period applications were more effective on erosion resistance and PVA's second period applications were more effective on coefficient of linear extensibility. 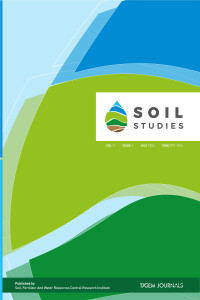