In our study, it is aimed to reveal and analyze the booklet called Shudhūr al-dhahab fī taḥqīq al-madhhab of Dulāma (d. 1179/1765), which belongs to the late period of Yemeni-Zaidi school, with the critical edition method. In the work written as an addendum to Isḥāq b. Yūsuf's treatise called al-Tafkīk li-‘Uqūd al-tashkīk, critical issues related to Zaidi's fiqh such as the nature of the sect and its relation to Zayd b. Alī, the method of the sect, the takhrīj and tarjīḥ terms in the Zaidi fiqh texts have been discussed. The work, which is seen to have a madhhabian understanding compatible with the work called Bulūgh al-arab wa-kunūẓ al-dhahab fī maʿrifat al-madhab, which was written in the same period, is an essential source in terms of understanding the doctrinal structure of the Zaydiyya madhhab. Another thing that makes the work, which is prepared in the style of question and answer, important is that it was written by a jurist who was educated both from the prominent scholars of the Zaydi community and Hanafi scholars known for their sūfī personalities. The subjects that the work deals with are especially related to Zaydiyya fiqh, but they are also important in terms of the nature of the term madhhab in general. In our study, the preference method was used in the construction of the text of the work, which does not have a copy of the author, based on the four oldest copies, including the copy dated 1238/1823. 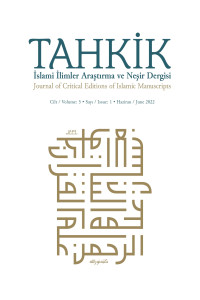