This study was carried out to determine the relation between patellofemoral (Q) angle differences and static equilibrium, flexibility and take-off force in young and veteran volleyball players. To the study 20 young males with an average age of 18 ± 00, 19 young females with a mean age of 18 ± 73, 21 veteran males with a mean age of 49 ± 04, 20 veteran females with a mean age of 48 ±70 who are registered players in Muğla Provincial Directorate of Youth and Sports, a total of 80 athletes voluntarily participated. The height, body weight, right and left leg Q angles in standing and laying, balance, flexibility and vertical take-off measurements were performed in the research group respectively. The statistical evaluation of the obtained data was done in SPSS 21.00 package program on a personal computer. In the data with normal distribution, the parametric statistical methods were used. While the analysis of variance (ANOVA) test was used for intergroup comparisons, the Tukey test was used for multiple comparisons, and the correlation level was used to determine the relationship between the variables and the significance level was taken as p <0.05. According to the findings, there were significant differences between the Q angles, balance, flexibility, and take-off values of the participants (p <0.01). Also, there was a positive relationship between Q angle values and elasticity values in standing and laying position, and a negative relationship between balance and take-off force values (p <0.05). 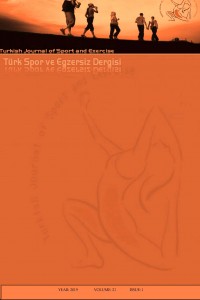