QUEER SONGS: WHERE TO FIND QUEER THEMES IN THE 1990s TURKISH POPULAR MUSIC?

In the cultural and academic realms, 1990s are remembered with a high dose of nostalgia, especially
regarding the Turkish pop music, and in these memory practices, queer individuals and approaches
are excluded. However, as the 1990s’ cultural history is being rewritten through Turkish pop, it is
imperative to include queer theory and its perspectives in this historiographical practice. Research
on the nostalgia towards specifically the 1990s is important for excavating the potential of the
nostalgic approach of those who are not contempt with the change followed in the decades after
this period. The queer approach, which rejects mainstream identity categories, centralizes
individuals and concepts that have been marginalized in the mainstream historical process, and aims
to write LGBTQ+ individuals’ narratives and stories into history, has the potential to contribute to
the restructuring of the future by nostalgia, if they are included in the process. With this aim, we
combine textual and visual analysis of six songs and video clips which allow queer readings in the
1990s and their producers’ opinions as expressed in the mainstream media analysis under Alexander
Doty’s concept “queer moments”. The analysis of these queer moments proves that recognizing
queer moments correctly diversifies our understanding of the 1990s more accurately and
contextualizes the contemporary rise of queer visibility and activism, along with its roots. 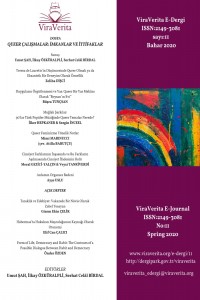