In this study, the effect of the activity-based semiotic text analysis method on middle-school seventh grade students’ story analysis skills  course was investigated. The model of the study is a quasi-experimental design with a pretest-posttest control group.The deviant case sampling method, which is a purposeful sampling method, was used to determine the sample of the study. In this direction, based on the TEOG success rating of 2014–2015 academic year, 97 students at a middle school with a high rating (O1) and at a middle school with a low rating (O2) in Erzurum province center participated in the study. The researcher went to the schools determined by the researcher and obtained the data through the Story Analysis Form.  Data were analyzed using the t-Test for Independent and Dependent Samples. According to the findings obtained, it is concluded that the activities prepared based on the method of semiotic text analysis increase the students' success in analyzing stories. 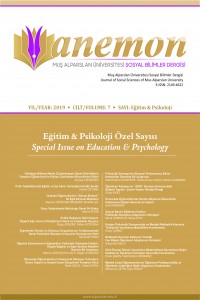