Evaluation of the Transportation Infrastructure Vulnerability in Kaynarca, Sakarya Basin from a Flood Spread Risk Perspective

Natural, technological or man-made disasters caused social, economic and environmental losses in history. These devastating events affect communities by stopping or interrupting normal life and usual daily activities, and the affected community cannot cope by using local opportunities and resources. The topographic, climatic and seismic structure of Turkey allows disasters to be seen frequently in the region. Disasters such as floods, landslides-rock fall and fires are experienced almost all year round in its seasons, including medium-scale earthquakes (with an average magnitude of 5 to 6). Furthermore, transportation infrastructure has been a critical asset in all stages and time frames including mitigation, preparedness, response and recovery in disasters. In this study, the Kaynarca district of Sakarya has been evaluated based on its flood flow recurrence modelling with its effect on transportation infrastructure. With a range between 25-year and 500-year recurrence scenarios, it is found that the local roads and streets are vulnerable in all different cases, while major collectors are significantly affected by flooding in the 500-year recurrence scenario. Major collectors are the transportation infrastructure carrying the transit passengers and loads, as well as emergency aids from disaster logistic centres in case of need; therefore, less disruption increases the resiliency of the infrastructure. On the other hand, local emergency management agencies should prepare a contingency plan for local roads and streets for pinpointing the possible gridlocks, accessibility of critical infrastructure in rural areas, and robustness of major collectors. 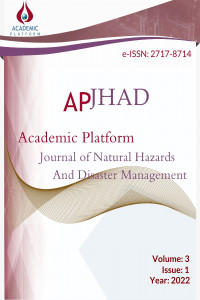