In this study, the level of Pb, Zn, Cd of Ayvalik Saltern, determined by using Halimione portulacoides (L.) Aellen, analysis were done by using Perkin Elmer Analyst 700 Flame Atomic Absorption Spectrophotometer (FAAS) device. Saltern which is located adjacent to the Izmir-Canakkale highway, heavy metals changes determined, depending on the distance to the highway. The root, stem, leaves, and cultivation soil of plant was formed material of this study. Sampling, were done 7 station which was determined on the soil dam is surrounding saltern between 2009-2010. Through 12 months, samples regularly collected from every station. As a result of all analysis, we saw the level of Pb <0.001-0.977 ppm, Zn 0.099-1.650 ppm, Cd <0.001-0.102 ppm in the soil Pb 0.523-1.599 ppm, Zn 0.143-1.248 ppm ve Cd 0.006-0.432 ppm. Accumulation of Pb and Zn increased depend on a highway, Cd accumulation couldn’t be obtained clear correlation with distance highway. The fact that the results İn the analysis are below the limit values is because the dominant direction of the wind is North-west (through Tuzla motorway), there aren’t any crossroads or signalization on the motorway on the southern part of Tuzla and there aren’t any industrial plants having polluting effects. 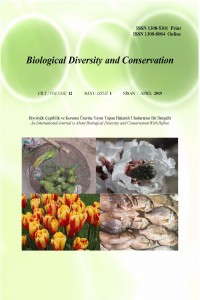