Another hidden plant of the lost city Halfeti: Green rose

Turkey is one of the most important gene centers of roses. There are 45 rose species in our country. Roses, which are considered the queen of flowers; in addition to their spectacular and fragrant flowers, ornamental plants, cosmetics and perfumery, food and medicine sectors are among the most important plants in the world with their widespread use. There are ground-covering, wrapping and climbing, shrub and woody forms of roses. For centuries, Turkish people have used the fruits of some species to make marmalade, rose syrup, rose molasses and tea, and their flowers have been used for making rose water, jam, rose vinegar, etc. used in their construction. The Halfeti district, which was under the waters of the Birecik Dam, was brought up with its famous black rose (a genotype belonging to the Rosa odorata species) and was referred to as karagül. About 2-3 years ago, news began to appear in the national press about the beginning of the cultivation of the green rose by the Halfeti Agriculture and Forestry District Directorate. Green rose, whose scientific name is Rosa chinesis var. viridiflora is native to China. It is not known exactly when and by whom the green rose was brought to our country. In this study, it is aimed to introduce the green rose to academics and all interested parties by bringing together the information gathered from various sources related to the green rose and the information obtained from the face-to-face interviews with the residents of Halfeti district. 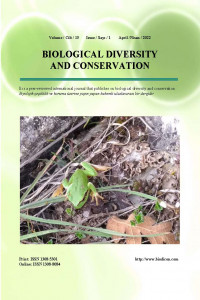