USE OF OMEPRAZOLE IN PATIENTS HOSPITALİZED IN A UNIVERSITY HOSPITAL AND TREATED WITH DIGOXİN: DATA ANALYSIS BETWEEN 2011-2015

Objective: Proton pump inhibitors (PPI) are among the most frequently prescribed drugs in Turkey. The main reason for the frequent prescription of this drug is that it is regarded to be safe. However, omeprazole, which is in this group, is important for drug-drug interactions as it can interact with many drugs. We planned to investigate the frequency and appropriateness of omeprazole usage as well as its probable interactions with other drugs in a data setting of digoxin users.

Material and Method: This is a descriptive and cross sectional study in which electronic patient data in a university hospital were reviewed. The data of the patients hospitalized between January 2011-December 2015 in the cardiology service and treated with oral digoxin were evaluated in accordance with literature criteria. Data were analyzed using descriptive statistics, chi-square and t-test. The drugs with potential interaction risk with omeprazole were selected from the Micromedex® Pharmaceutical Knowledge. Major and moderate interactions with excellent and good evidence were evaluated.

Results: Omeprazole was used in 69.4% of the total of 1580 patients. Mean age of patients who used omeprazole was higher than those who did not (p<0.001). In 67.4% of the patients, omeprazole was used on appropriate indication. It was found that in 2014 the frequency of omeprazole use was lowest (48.9%); whereas its use without indication was highest (50.6%). All of the patients using omeprazole were being treated with digoxin due to selected sample of patients. Moderate interaction is defined for the combined use of omeprazole and digoxin. Among the other drugs that may cause moderate interactions, the most commonly used one was warfarin (41.5%). Among the drugs that could cause major interaction, the most frequently used drug was clopidogrel (27%).

Conclusion: Use of omeprazole was frequent in cardiology inpatients taking digoxin. Although omeprazole was used with appropriate indication in the majority of this group, one should beware of drug-drug interactions and prefer other PPIs with lower risk of interaction. 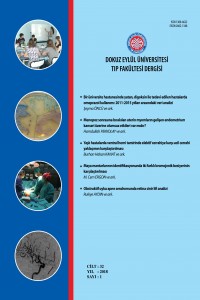 please visit us on: https://tip.deu.edu.tr/en/aims-and-scope/