In this research, the Electrical Conductivity (EC) values of the water resources in the trout farms in the Niğde Region (Turkey), which is located in the Central Anatolia Region, were periodically examined. Within the scope of the study, water samples were taken from four randomly selected trout farms in different periods (spring, summer, autumn and winter). Water samples were collected from the pond enterance and the pond exit. EC measurements were carried out in three replications using an EC meter in the laboratory conditions. The EC values of the water samples were interpreted within the scope of the "Water Pollution Control Regulation" standards published by the Ministry of Environment and Forestry in 2004. As a result of the study, the average EC values of the water saamples for four different trout farms (No1, No2, No3 and No4) were determined as 480, 320, 689 and 540 µS/cm, respectively. Considering the data obtained in the study, it can be concluded that the EC values in the region examined according to the Water Pollution Control Regulation do not pose any problem in terms of fish farming. 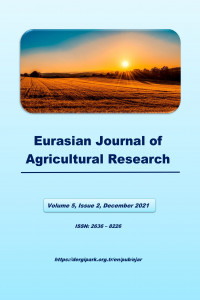