Empathy Based on Gender in Dissertations Submitted in Turkey: A Meta-Analysis Study

Problem Statement: Today, where the relationships among people have increased and concentrated, maintaining powerful communication channels with the individual(s) is significant for conducting healthy and sustainable relationships with others. Social roles assigned to gender and physiological differences determine the understanding of individuals of the emotions and thoughts of their counterparts. Empathy is among the precursor factors in the initiation and maintenance of healthy interpersonal relationships; reduction of conflicts and resolution of problems; and gratification in relationships. Thus, a study to review the dissertations on empathy and investigate the variances on gender is of utmost importance to clarify the differences between the empathic behaviors of males and females. Purpose of Study: This meta-study aimed to use the data collected from the dissertations submitted in Turkey to answer the following research questions on empathy: “Does empathy differ based on gender?”; “Do the levels of education of the students affect the differentiation of empathic tendencies based on gender?”; and “What is the difference between empathic tendencies based on gender in the dissertations submitted before 2009 and in 2010 and later?” Method: A meta-analysis method was used in the study. The widely accepted purpose of a meta-analysis is to reach the most accurate results by combining the findings from numerous independent studies on a subject. The main data sources of the study are the dissertations and masters’ theses on empathy submitted in Turkish universities. The studies scanned in the study were conducted between 2005 and 2014, of which 87.67% (f=64) were masters’ theses and 12.33% (f=9) were dissertations. The Board of Higher Education (YÖK) Thesis Survey database was used for the thesis survey by using keywords “empathy” and “empathic” (both in Turkish and in English). The search revealed that certain theses on empathy, which could be included in the meta-analysis, were not available in the system or had limited availability. To access these studies, their authors or advisors were reached by e-mail. Finally, 73 studies out of the 218 obtained were included in the meta-analysis. Findings and Results: As a result of the combination process conducted within the random effects model, a positive and statistically significant effect size was observed favoring the females by 0.31 [0.25 – 0.38]. Recommendations: This study was limited to the theses submitted in Turkey; further studies could be conducted to include all research conducted on empathy. This study scrutinized only the gender variable; further studies could use different variables. Future studies would be more appropriate if different variables were used. Keywords: Empathy, empathic tendency, gender, meta-analysis, moderator. 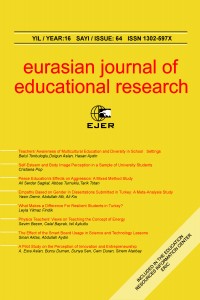