Each child gains a place in society by being different from other individuals with his/her own characteristics. Individual differences, interpretations of situations, perspectives, ways of expressing themselves, problem solving strategies and learning styles vary from child to child and affect children's creativity. According to the National Advisory Committee Report (The UK National Advisory Committees), imagination and thinking power, a specific goal and achievement, and finally, originality that overlaps with the goal have been identified as the primary elements that shape creativity. It is very difficult to find storybooks for 5-6 year olds that do not contain images. Since these children have not yet received literacy education, the books are usually read to them by adults at school. In this study, it was investigated whether the visuals we use while reading storybooks to children, by observing and copying these pictures cause the creativity of children to be extinguished or limited, or whether the visuals strengthen children's visual thinking skills and support children's creativity more. The research was conducted with a total of 54 preschool children aged 60-72 months, using a total of 2 visually rich children's books. The study was an experimental study, and the participants of the study were divided into groups, 23 of which were control and 31 of which were experimental, and the children in two classes in a private kindergarten were formed by forming control and experimental groups. While the children were divided into groups, the "Torrance Creativity Test" was applied to the children and two groups were formed with the average of the creativity scores close to each other. It was aimed for the control group to read a book by a practitioner without using the visuals in the book, and for the experimental group to read the book by the same practitioner by using the visuals (illustrations) in the books. Both groups were asked to paint what they understood and thought from the book they listened to. The findings were evaluated by examining the pictures of both groups and considering the four main categories Lowenfeld created in the analysis of children's drawings. These categories are; color, form, space and expressiveness. Color types used by children, their tones and how they mastered colors were examined. The richness of the image in the form, the objects used, the expression of movement in the painting, and the detail were discussed. The spatial perception of the children in the space and their ability to place the objects they use in the space were examined. In expressiveness, all categories were scored with a 5-point Likert scale based on how well the child has mastered the subject in the book, his level of understanding of the subject, and the expression he used in the picture. According to the results of the t-test, there was no difference between the averages of the experimental and control groups of the 1st book. For the second book, a significant difference was found between the experimental and control groups. Children who drew without looking scored higher. The effect of the quality of the pictures used in the books on reading emerges. 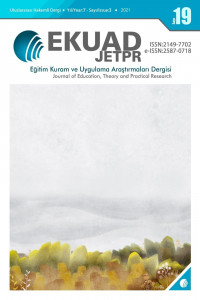