Undoubtedly, one of the most important factors that keep nations together is that the language is learned correctly and passed on to future generations. This research is a scale development study to determine the barriers to Turkish learning of children of Turkish origin abroad. For this purpose, a measurement tool was developed by collecting data from Turkish children living in different cities of Germany. Within the scope of the study, the first exploratory factor analysis was performed and it was concluded that the measuring tool consisted of three factors and 21 items. As a result of the analysis, it was seen that the three-factor scale explained the total variance of 58.814%. The sample of the research consists of Turkish origin children between the ages of 9-16 in Germany. To develop this scale, data were collected for Exploratory Factor Analysis (EFA) from 300 persons; Data were collected from 260 persons for Confirmatory Factor Analysis (CFA). The items obtained as a result of the Explanatory Factor Analysis were verified with CFA. Likewise, the scale goodness fit values were found to be among acceptable values. The internal consistency coefficients for the scale were examined and the coefficient was found to be .915. In item analyzes, item total and item residual analyzes were found to be significant at all values (p <, 001) level. Since the scale tests the difference between the upper and lower groups, analyzes have been made and it is seen that the scale is successful in distinguishing the groups. 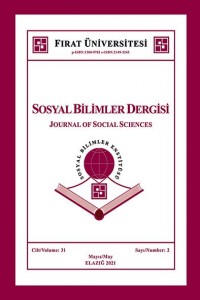