REACTIONS TO THE PRACTICE OF CHILD DISTRAINT: TWITTER EXAMPLE

The conflicts of some couples who have had a conflict in the divorce process may continue over the children after the divorce. In particular, the parent holding the custody may prevent their child/children from meeting with the other parent for various reasons. Parents who are prevented from meeting with their children have the opportunity to see their children according to the procedures specified in the Enforcement and Bankruptcy Law. This study aims to determine how parents who are prevented from meeting with their children attribute meaning to this practice, which is popularly called child distraint and how they react to it. For this purpose, tweets posted on Twitter between July 7 and July 22, 2021 with the hashtags of "#ÇocukHaczi" and "#Çocukİcrası" were examined. A total of 1678 tweets posted with these two hashtags were analyzed through the NVivo program. The findings obtained in the analyzes were evaluated over the themes of "emotional expressions", "commodified child", "economic problems" and "reaction to politicians and laws". For the healthy development of the children of divorced couples, it is compulsory to abolish the practice of child distraint and replace it with a more humane solution. At the same time, legal preventions have to be taken against the problem of parental alienation, which turns into emotional violence on children and parents. 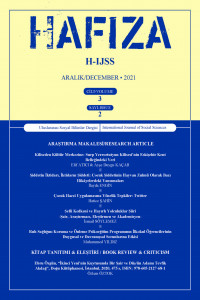