Aim: The exact pathogenesis of gallbladder adenomyomatosis (GBA) is still not fully elucidated, and there is some controversy regarding its diagnosis and treatment. Adenomyomatosis, which was initially considered a precancerous lesion, has been recognized in recent studies as a benign alteration of the gallbladder often associated with cholecystitis and cholecystolithiasis. In this study, to investigate the pathogenesis of GBA; It was aimed to compare the levels of biomarkers showing the proliferative activity of tumor cells in normal and adenomyomatosis tissue of the gallbladder and the levels of biomarkers showing the positivity pattern of neoplastic tissue in the same patient.
Method: The pathology reports of a total of 750 patients who underwent laparoscopic cholecystectomy between 2019-2020 were reviewed, and 20 cases diagnosed with adenomyomatosis were evaluated retrospectively. Ki-67 as a proliferation marker and P53 as a neoplastic activity marker were evaluated separately in the normal tissue of the gallbladder and adenomyomatosis tissue.
Results: When the mean values of the Ki-67 index in the normal gallbladder and adenomyomatosis tissue were compared, a statistically significant difference was found (p<0,000). However, when these two groups were compared in terms of the mean values of the P53 index, no statistical difference was found (p=0,062).
Conclusion: Although this study found significantly higher Ki-67 proliferation marker levels in adenomyomatosis tissues, the fact that the common P53-positivity pattern of gallbladder cancer did not show significant differences in these tissues compared to normal tissues appears to support that GBA is not a cancer-precursor lesion but a benign proliferative lesion. 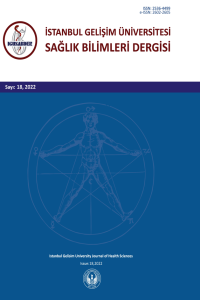