Pollen morphology is an important parameter. In this study, the pollen morphology of selected in 10 grape cultivars were examined by SEM (scanning electron microscopy). The pollen surface features were observed, such as length, width, and P/E ratio of pollen. The pollen differed in some microstructural characteristic. Pollen width exhibited significant according to the varieties (10.12-22.44 µm). Smilarly, the statistical difference occurred among the ten Vitis genotypes in terms of mean pollen length (16.26-29.91 µm). P/E ratio determined to the varieties (1.08-2.55 µm) and, grape varieties have the longest pollen, in general. The without furrows are surrounded in exine were determined in cultivars of “Alicante Boushet”, “Cardinal”, “Syrah”. Areolat pollen was determined in among other cultivars. Depending on the cultivars there was a statistical difference from the point of pore diameter. Pollen viability was determined between 11.75 % and 84.25 % in TTC tests. The present research is a contribution to amore detailed analysis of grapevine cultivars. 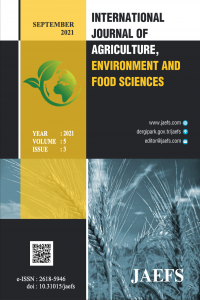