the collective memory with loose ties. Fort his reason national identity is reproduced in daily life, especially through popular cultural products. The film “The Pocket Hercules Naim Süleymanoğlu” provides a cultural ground where we can analyze the issues of nationalism and national identity, which are reproduced discursively in daily life, with the story of Naim Süleymanoğlu, which is woven around his escape to the homeland of Turkey to become the “voice of the Turks who are persecuted in Bulgaria”. Because phenomena such as migration and assimilation, which strengthen the colllective narcissism and humiliation, are the mainstays of the painful and painful common past and social wounds that reproduce the national identity through the self and the other opposition. Based on these assumptions, the movie “The Pocket Hercules Naim Süleymanoğlu” was analyzed with critical discourse analysis. It has been found that symbols of collective humiliation and narcissism are frequently used in the film to activate social impulses. It has been determined that the sense of collective narcissism is mainly strengthened by myths of ethnic election and heroism, holy homeland, love of the country, patriotic death, patriotism, republican ideology, the feelings and values of compassion, perseverance, challenge, self-sacrifice. On the other hand, it has been revealed that collective humiliation is strengthened through cultural practices such as religion, language, and phenomena of pain, fear and cruelty. Furthermore, it has been determined that conservative nationalism, which uses ethnic elements, and glorification of national culture in order to strengthen Turkish national identity, and Kemalist nationalism, which is based on the territorial element, and the symbols of the republic, as well as ethnic components, are reproduced with an eclectic approach. 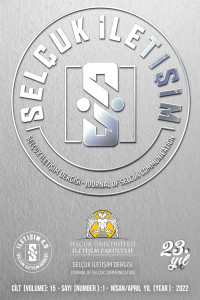