This study has been prepared in contribution to the newly released Tahkik İslami İlimler Araştırma ve Neşir Dergisi (“Journal of Critical Editions of Islamic Manuscripts”). It also seeks to explore one of the scholarly genres in the field of critically published texts, namely, periodical publications, and in particular the Majallah Ma‘ahad al-Makhtūtāt al-‘Arabiyyah. Firstly, possessing basic knowledge of manuscripts and that of the historical periods of manuscripts of Islamic history in particular is a minimal requirement in this field. In the Islamic cultural heritage, there exists many a manuscript of treatises that are either in the form of a single leaf or a short tract. When it comes to preparing such works for publication, their length do not always suffice that of a book. For this reason, periodicals have been issued in order for critical editions of manuscripts of such works, particularly those containing short treatises, the history of books and writings, and studies on libraries and cataloging, get published. 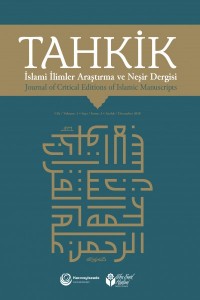