This study aims to investigate the attitude scale scores of university students studying at Niğde Ömer Halisdemir University towards healthy eating. A total of 921 students voluntarily took part the study, 334 in the Faculty of Sport Sciences, 89 in the Social Sciences, 498 in the Faculty of Arts and Sciences. The independent T-test was used as a pair comparison and the one-way ANOVA test was used to define the difference between groups. As a result of the analysis, the mean score of men was determined as 69.06, while the mean of women was 68.35. Although no significant difference was found in the group comparison, it was determined that the mean of men was higher. In the Attitudes Towards Healthy Eating Scale score classification, both men and women were in the high group. It has been determined that there is an important difference in the comparison of the SBİTÖ score averages according to the regular activity status, and the difference is in favor of the students who regularly engage in activities.
Consequently, regular activities were observed to have an impact on the healthy eating attitude score. In addition to the students of the Faculty of Sports Sciences, the fact that the students of other faculties are interested in various branches that closely follow the training and healthy eating patterns is thought to have contributed to this result. 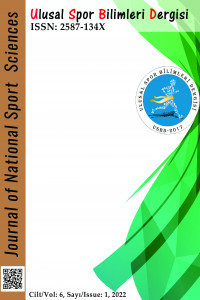