Under Article 121/1 of the Turkish Commercial Code (TCC) numbered 6102, even if the agency agreement is concluded for a certain period, it can be terminated due to just cause. This method, which allows terminating the agreement before its term, is frequently used. However, the concept of just cause is not defined in the TCC. For this reason, in this study, the idea of just cause in the termination of the agency agreement has been examined. Accordingly, the just cause was first tried to be defined, and the elements of the just cause were discussed. Then, the legal fate of the justified reasons agreed by the parties in the agency agreement was examined. Finally, the situations that may constitute cause for the client ve the agency are discussed in general terms. In this section, the conditions encountered in practice are given in detail. 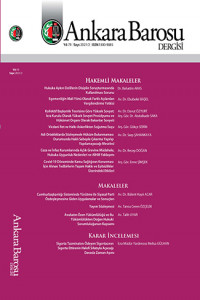