In this study, we aimed to describe otoliths to provide information about the stomach contents of three small foraging species and to contribute to the currently limited biological and ecological evidence about the species. Seasonal experimental bottom trawl surveys were conducted along the shelf areas of the Kızılırmak-Yeşilırmak and Melet Rivers to collect investigation materials which were abundant in the bycatch composition of the target catch. The information about body size measurements, abundance values, depth, season, and locality of samplings was recorded for further evaluations. Otolith shapes were defined as discoidal to ovate for the Aphia minuta, discoidal for the Pomatoschistus marmoratus, and square for the Arnoglossus kessleri. The mean length and weight values of the Aphia minuta, which was abundant along shallow coastal waters (0-30 m), were significantly different between localities and sampling season, but no difference was found between depth ranges. Pomatoschistus marmoratus, whose distribution varied significantly between depths and seasons had dense distributions along with the depth range of 30-60 m. Arnoglossus kessleri was most abundant along with the depth range of 0-30 m and had no samples in depths of over 60 m. It was found that the mean values of length and weight of this species were only significantly different among seasons but similar over the depth ranges and localities. 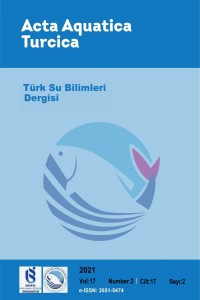