An Evaluation of Fisheries Management on the Lake Yeniçağa, Bolu, Turkey

Lake Yenicaga formed as a result of filling a depression, which developed with the effect of the North Anatolian fault line, with alluvium afterward. Lake Yenicaga includes the largest peatland in Turkey that reaches up to 2 meters of depth. Lake Yenicaga also has the potential for the commercial fishery. Six different species of fish have been located in the lake. These are Capoeta baliki, Cyprinus carpio, Carassius gibelio, Squalius cephalus and Tinca tinca from the family Cyprinidae and Gambusia holbrooki from the family Poecilidae in coastal regions. Furthermore, Astacus leptodactylus, which has economic importance, lives in the lake.
As a result of the failure of implementing an effective management strategy in Lake Yenicaga, which has been exposed to anthropogenic factors that have been increasing gradually since the 2000s, there was a serious decrease in the commercial species in the lake. During the same period, it has been changed in the ecosystem then some exotic species entered the lake. In this study, changes in the fish fauna of the lake in the last 15-20 years were determined. However, suggestions related to primarily commercial fishing and long-term and rational lake management were made. According to findings, three species of fish (carp, gray mullet, and tench) are fished and marketed by a cooperative member in Lake Yenicaga. Although there was not too much fluctuation in the landings over the years, there has been a radical decline in the number of fish landings since 2015. In terms of the sustainability of fish populations in the lake, applying overfishing on S. cephalus which are dominant in the lake, and decreasing the pressure of fishing on C. carpio and T. tinca is very important. Applying controlled and balanced fishing on all species of fish in the lake will be effective in protecting the diversity of species. 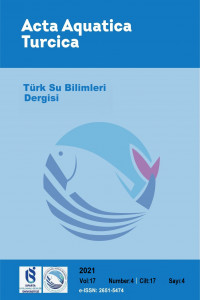