A Digital and Conventional Approach to the Rehabilitation of Totally Edentulous Maxilla with a Toronto Infrastructure Design Hybrid Prosthesis: A Case Report

Abstact: Implant treatment is performed to compensate for the loss of support, stability and retention in the treatment of partially or completely edentulous patients. In prosthetic restorations on implants, hybrid prostheses can be produced by designing different infrastructure designs with the help of digital and conventional techniques. Case Report: A patient with a completely edentulous jaw applied to our clinic for an over-implant prosthetic restoration. In the anamnesis, it was determined that the first treatment of the patient was with a fixed implant bridge restoration, but the patient was not satisfied in terms of function and aesthetics. When the condition of the oral tissues, ridges and the position of the implants were evaluated, a hybrid prosthesis was indicated. The prosthetic infrastructure and superstructure design of the fully edentulous arch to be rehabilitated with a hybrid prosthesis was made by combining conventional and digital systems. The infrastructure design of the hybrid prosthesis was designed digitally through special software and the rehearsal materials were obtained digitally. After informing the patient about the final appearance of the prosthesis during the rehearsal stages, the permanent prosthesis was completed with the Toronto prosthesis design on the implant consisting of a metal-supported porcelain system. 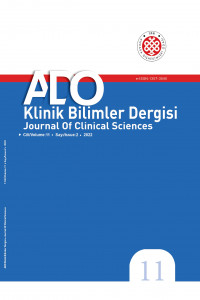